Making money with Amazon Alexa: how does it work? With Alexa there are three ways to earn money, which I present in this article.

With Amazon Alexa you can actually earn money, and some even earn quite a bit with it. The following article is an excerpt from my book “Developing Alexa Skills“. Click on the picture to buy the book on Amazon from 8,99€. It’s worth it for developers and those who want to become developers.

Earn money with Alexa: as a developer in the Alexa Developer Rewards Program

In order to be interesting as a platform for as many developers as possible, Amazon offers the Alexa Developer Rewards program, a way to receive a bonus payment for particularly popular and frequently used skills from Amazon.

An article by CNET describes how the developer Joel Wilson with his skills “Three Questions” and “Question of the day” regularly received checks from Amazon as part of the “rewards” program, some of which amounted to several thousand dollars. on the rewards page, Amazon itself describes other developers who have partly opened their own studios with this money. It has to be said, however, that the criteria Amazon applies are not known, and that as a developer one cannot directly understand how the amount of a payment came about. Amazon is very secretive here. 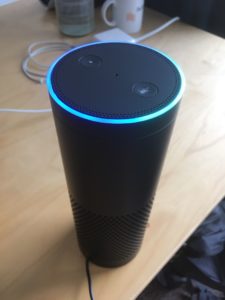 Amazon Vice President for Alexa Skills Robert Pulciani said in an interview that the company is “constantly looking for ways to make customers feel comfortable” while helping developers “build a voice first business. According to Pulciani, payments are calculated from a number of factors including “useful life, new customers, returning customers, customer ratings and more”.

Earn money with Alexa: as a developer in the Champions program

In addition to these payment options, Amazon has created additional incentives for developers by hosting hackathons and webinars, partnering with educational institutions such as the Codecademy, and launching the Alexa Champions program. There is also the Alexa Prize, a college competition that pays $500,000 to the winner.

Interesting Alexa projects can also be found at hackster.

Earn money with Alexa: as a seller with In Skill Purchasing

Additionally, in 2018, in-skill purchasing was integrated as a first opportunity to sell other things within Skills, so that there is also an opportunity to earn money here. In-Skill Purchasing is currently only available in the USA, but will certainly also be available in other countries in the future.  Placing ads in Skills is excluded in the terms of Amazon Alexa in early 2019, also is not allowed with external advertising, such as Google Adwords, to show on Skills..

However, it is a good idea to sell physical goods and services through Alexa Skills. Alexa offers a new distribution channel for brands and retailers. With Amazon Pay for Alexa Skills (currently only in the U.S.), you can use Amazon’s simple language buying service to sell physical goods and services such as event tickets, transportation, flower delivery and more. Once Amazon Pay is integrated, the Amazon Pay account is linked to the Amazon Developer account at the sales center, and since Amazon Pay integrates with existing CRM systems, sales can be managed within the existing process.

For large corporations, the integration of Amazon Pay is also relevant, as customers can pay for a pizza using the TGI-Friday Skill via Amazon Pay. Money earned with Alexa is displayed under “Earnings” in the Alexa Skills dashboard in the developer console. Here you can see payments and winnings for in-skill products. Amazon also offers a downloadable guide on how to earn money with Alexa.